Dog lovers unite for this ultra-cuteness fest! It’s a shame dogs can’t eat chocolate, because these guys seem to be having an awesome time playing in a Chocolate Dog Park! My friend requested a “dog park themed cake with maybe a dog that looks like Koby (their pet dog)” for her then-2-year old son. I may have gone a li’l bit crazy after I figured out how to make one dog.

Of course my inner (and outer) engineer first decided to make a “test” dog. It was quite ugly and scary looking. From there on, it was just youtube video after youtube video on making dogs, and cats, and various animals, and the thing that makes dogs look adorable and goofy isn’t their body/face shape or even the eyes – its the tongue and the ears!

Once I got that part down, I experimented with various colors and positions – here are the subjects of the Dog Park (pardon my dirty work mat):

Some were sombre, some were up to too much mischief, some were a bit dainty and some others were just plain lazy! 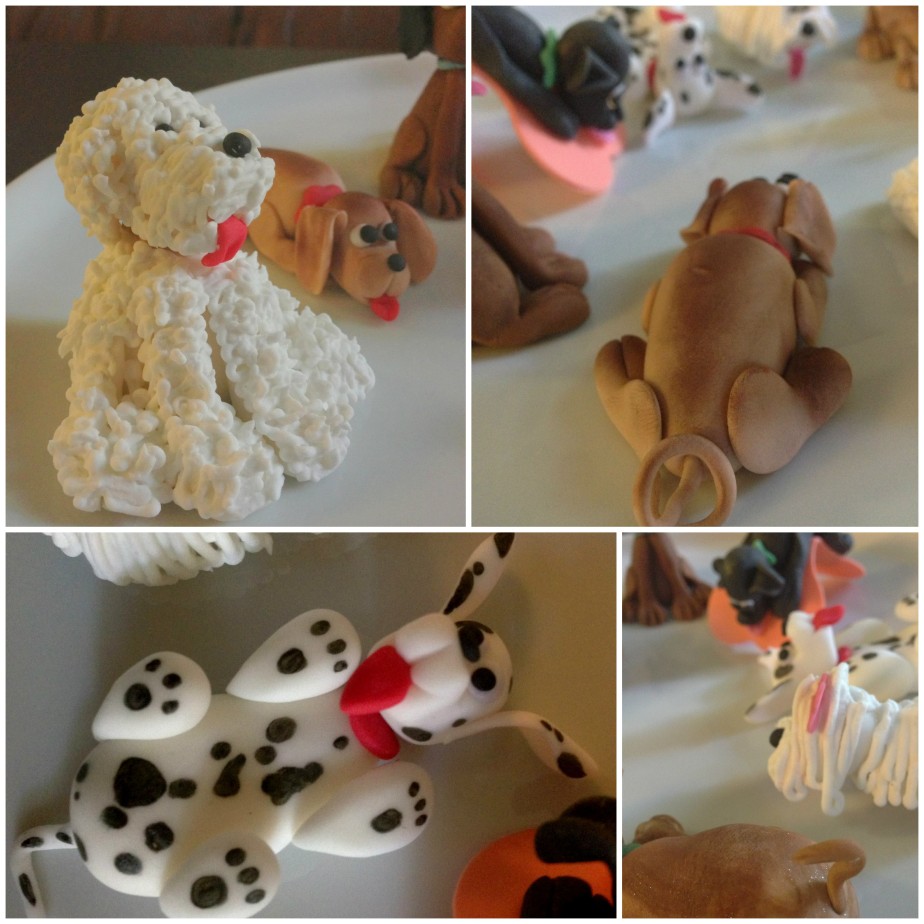 Now that the subjects of the park were ready, it was time to think about the ambience – made some fences, slides, puddles and whatever I imagine dogs like to play with!

In this prep shot, the cake looks rather small but it was 2 9*13 inch layers of rich, double chocolate cake (each 2 inches tall) covered in about 12 cups of chocolate fudge buttercream!

Awaiting his turn to jump into the puddle!

The birthday boy was a San Jose resident, so..

This one just seems stuck there.

The guy having the most fun! 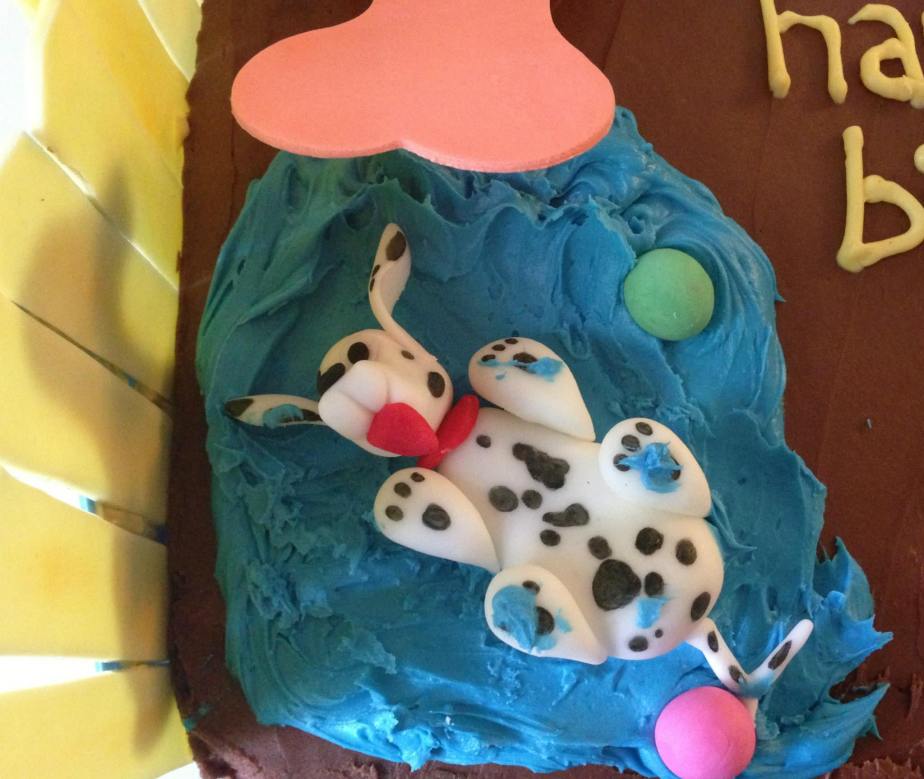 I always make extra cake batter, especially with really big cakes like this one and then I use the extra batter to make cupcakes (which can be frozen for weeks). Sometimes the cupcakes serve as an extra dog park “section”:

This is Koby – he was the boss! Waiting for Arjun (the birthday boy) to come to his birthday party!

And now for the final shot – TADA!

A cake like this is a lot of work, most of it related to the gum paste/fondant work that goes behind making those goofy dogs! It took me several weeks to make the dogs, dry them completely and then decorate them (and dry them again). Baking the cake and making the frosting was relatively easy. But it was all worth it when the birthday boy saw the cake and the dog gang, and picked up his own “Koby” dog and smiled. My friend had some ambitious plans of preserving the dogs but with all the kiddos at the party already hopped up on sugar, the dogs didn’t stand a chance!

One thought on “Woof!”

So many people have told me that it’s “so mean” that I made all those cupcakes for Aaroh’s milestone birthdays and he didn’t get to eat any of them! For his first birthday, I fixed that.
The last hurrah.
Ganpati Bappa Moraya!
Happy FIRST birthday to our tiny human. Aaroh, you are and will always be the best thing I ever made.
I must have lost track of time because out of nowhere, this energizer bunny is 11 months old. None of the house furniture is safe from this tornado, so you can see why the blueberries didn’t stand a chance!
10 months old and naughtier than ever! This tiny human had not yet noticed the pink squishy things within his arms reach at this point, so we could take this shot! But sure enough, the window of opportunity closed rapidly.
Regardless of how summer is making you feel wherever you are, it is officially just around the corner! So whether you are Team “can’t wait for summer!” Or Team “too hot. Can we move on to Fall now?”, this fruity and floral @simplelooseleaf Blood Orange tea paired with chilled, no-bake Rose Cheesecake squares will fit the bill!
This is not a bouquet of roses. It is a gluten-free lemon layer cake with cream cheese frosting that I recently made for a friend! I received a slice of the cake later (for research and development purposes, of course), and it was a lil bomb of lemon indeed!
9 months old today! And distracted just long enough to take this picture 😅