The “Chorizo Scramble” has been dominating my breakfast/brunch order for years now, right from the first time I had it 7 years ago at a cafe on Catalina Island. Occasionally I’ll order poached eggs with hollandaise sauce if the restaurant is particularly spectacular, like The Table in Willow Glen, but most of the times its the Chorizo Scramble. And it doesn’t photograph too well, now that I think about it. And honestly, most of the time it tastes just about okay. If you order the version with all eggs (no egg whites), then it tastes rich enough, but 3 egg yolks in one go is dangerously close to my weekly egg yellow quota. If you order the version with egg whites…well, you may as well order saw dust. The egg whites are so overcooked that they are reduced to a pile of pea-size bits. Either way, you need some cheese to bring it all together and hide the inadequacy of egg whites, but cheese is something my body stopped processing gracefully 5 years ago, so that’s not an option. “Wow, you sure are demanding!” is what I get most of the times when I describe my scrambled egg problems to people, so I decided to just make it myself going forward.

When I was doing some research for my next Black Swan Journeys article, I stumbled upon something glorious, in the name of “Chouriço Pão”, which loosely translates to Chorizo Bun. It is a traditional Portuguese-Goan snack, and basically the spicy version of the base of the Chorizo Scramble, sandwiched in a soft bun (minus the egg). I realized that I definitely had something to do with the Portuguese in my past lives, based on my love for chorizo sausage and most important of all (to me), potatoes!

This spicy, hot Chorizo-Potato mixture can be used not only to make Chouriço Pão, but more as a palette for all chorizo goodness! Warm up the mixture in a small fry pan and scramble in your favorite combination of eggs and egg whites in the proportion you want. Add some cheese while its hot and make a quick breakfast taco – you are just a few slices of avocado away! Spread the mixture along with some black beans  on a toasted tortilla to make a delicious tostada! Wrap some in a tortilla with some cheddar cheese and make chorizo quesadilla! Mix in with some leftover brown rice to have almost-instant spanish fried rice! Or add more rice, beans, this salsa, and sour cream, to make a divine burrito! So much to try and so little time – you best get started right away.

Start with some Pork Chorizo or Hot Linguica – the more spicy-looking, the better!

Remove from the casings, and give them a rough chop.

No Portuguese meal is complete without Potatoes, so we’ll need ’em diced potatoes for sure, along with some minced garlic, chopped green chillies and thinly sliced shallots (you can and should use yellow onions, I only had shallots on hand so I used those). Compared to the quantities of chorizo and potatoes, the quantity of garlic is on the lower side as you can see (just 1 clove) – this is because the chorizo is quite salty and garlicky, so I didn’t want the garlic to overpower the overall flavor of the dish.

Both Chorizo and Hot Linguica are pretty fatty and rich, so I didn’t find the need to cook them with more oil. In fact the cooked the entire mixture in the fat rendered from the chorizo!

Cook the chorizo in a wide-bottom, non-stick pan until cooked through and nicely crisped up, then transfer out of the pan with a slotted spoon, leaving the fat back in the pan. Drain on paper towels.

Back in the pan, cook down the onions. Once slightly softened, add the garlic, chilli and eventually the diced potatoes. Add salt to the mixture (err on the side of under-seasoning here, since the chorizo/linguica can be quite salty and the saltiness varies) and cook till the potatoes are cooked but still toothsome. Add the previously cooked chorizo back to the pan and let everything warm through together for a couple minutes:

Once its ready, you can do with it what you please! Garnish with some chopped cilantro or chives, and maybe some finely diced white onions.

To assemble the Chouriço Pão, split the Pão in half, and pile the mixture on to the base half. A squeeze of lemon juice adds a nice contrast too. For some extra chilled creaminess, I added a few slices of avocado. I imagine quick pickled radish or white onion slices would add a nice crunch to it as well! You could also toast the bun before assembling it if you prefer. 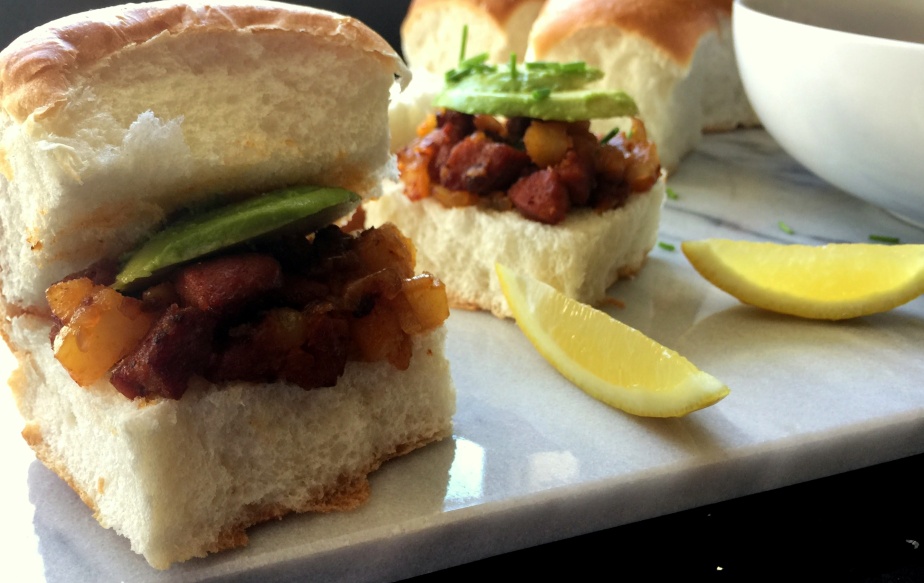 2 large- or 3 medium-sized links of Chorizo (Pork) or Hot Linguica sausage, casings removed, then roughly chopped (300 grams)
1 large Yellow Onion or 2 medium-sized Shallots, cut into thin rings or long, thin slices (175 grams)
1 large Russet Potato, scrubbed, peeled and cut into a 1/4 inch dice (200 grams)
2 Green Chillies, chopped
1 large clove of Garlic, minced
1 teaspoon Salt (you may need less depending on the saltiness of the sausage, so add in 1/4 or 1/2 teaspoon increments)
1/2 cup of water
1 tablespoon finely chopped Cilantro or Chives, for garnish
Lemon wedges, for garnish
Avocado slices, for garnish
8 indian-style Pao buns (Dinner rolls could be used as an alternative but they tend to be more powdery/dry with a loose crumb)

Spray a wide, heavy-bottom, non-stick pan with cooking spray. On medium-high heat, cook the sausages (since Chorizo and Linguica tend to be quite fatty and rich, I didn’t end up requiring any additional oil or butter, just the cooking spray was enough).

Once the sausage is cooked through and evenly browned, take it out of the pan using a slotted spoon, leaving behind the drippings in the pan. You should have about 1-2 tablespoons worth to cook the rest of the way. If the pan is too dry, you may add a teaspoon or two of Vegetable Oil (I didn’t need to). Be sure to use a neutral-flavored oil, such as Vegetable or Canola, and not Olive Oil. Transfer the cooked sausage bits to a paper-towel lined plate or tray and set aside.

Lower the heat to medium and add the thinly sliced onions or shallots and toss. Let the onions soften for about 3-4 minutes. Add the green chillies and minced garlic, and stir well for another 1-2 minutes.

Then add the diced potatoes and toss well so that the cooked onions coat the potatoes well. Cook for 3-4 minutes, or until the potatoes are slightly tender and starting to brown a little in the bottom.

Add 1/2 a teaspoon of salt and 1/4 cup of water to the mixture and cover and cook for 3-4 minutes. Check the seasoning and adjust to taste, but be careful and underseason since the sausage will be quite salty. Add the remaining 1/4 cup of water, and cook through for another 2-3 minutes, until potatoes are fork tender but still retaining their shape. Add the sausage cooked earlier to the potato-onion mixture and warm through, another 1-2 minutes. Adjust salt levels. Garnish with chopped cilantro or chives.

To assemble, slice the Pão horizontally so it opens like a bun and pile a generous amount of the filling (about a 1/4 cup) on it. Add a couple of avocado slices and a squeeze of the lemon. Serve warm.

The mixture keeps in the fridge for 2-3 days, or in the freezer for several weeks – this way you can use it to make other things as well (I have suggested a few options above).

Hi everyone! I haven’t been active here in a while, hope you all are well and good these past few months! Aside from my tornado toddler, here’s one of the things I was busy with ☺️
Hope we all have the courage and ability to take on 2022 with the enthusiasm of our little ones!
I know November is usually all about expressing gratitude, but the pandemic has time and again reminded us to be grateful all year round.
Happy Diwali from me and mine to you and yours! Wish you good health, happiness and peace of mind 🪔✨
Despite all my protests about how fast 2021 is speeding by, November is here now, and we must embrace it! And what better way to go than the delicious combination of this @simplelooseleaf Pumpkin Spice Black Tea and my Chai-spiced Pumpkin brownies?
Happy Halloween from Chef Linguini, Chef Remy and Anton Ego (the cast of one of my favorite movies: Ratatouille)!
Happy Halloween y’all!
So many people have told me that it’s “so mean” that I made all those cupcakes for Aaroh’s milestone birthdays and he didn’t get to eat any of them! For his first birthday, I fixed that.
The last hurrah.